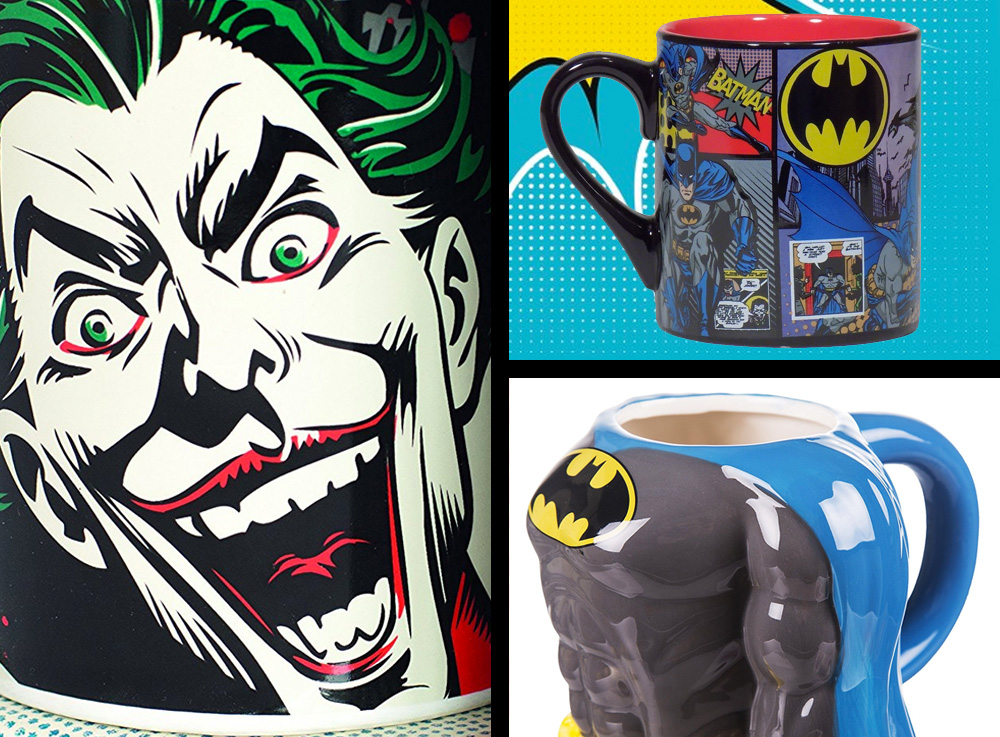 How does Bruce Wayne have the energy to run to the Batcave and slip into his tight suit in the middle of the night?

Gotham needs him! And Batman needs caffeine. He is, after all, a mere man under the bat suit. Shh, don’t tell anyone. Especially not anyone whose name rhymes with Garvey Bent.

To honor the caffeine-addicted world around us, we’ve sought out the coolest Batman coffee mugs that exist out there. For your drinking pleasure…

1. The Dark Roast Rises Out Of This Batman Mug Source: Amazon.com
The Batmen of the recent comics and movies aren’t very inventive when it comes to their color palette. There’s a reason. Black will always be the new black. Black works casually and smartly. It’s almost like he knows exactly what it is he’s doing to be noticed. Or, you know, not noticed in the middle of the night after his first shot of espresso.

Get the Batman Mug on Amazon.com Source: Amazon.com
If you’re thirsty, there’ll be no judgment here. Least he slipped on his blue cape and yellow belt for the occasion, right? Joke(r)s aside, I love having my morning coffee from mugs that are shaped like something. I just love it. And this Batman coffee mug is ripped. Ripped enough that I am debating switching out my Star Trek borg cube mug for it. (Or I can just double-fist two mugs of coffee at the same time.)

Get the Batman Torso Mug on Amazon.com

3. Note: Drinking From This Poison Ivy Mug Will NOT Poison You Source: Amazon.com
…unless you can be metaphorically poisoned by the art that is DC’s Bombshells. Ivy has always been gorgeous, but the Bombshells comics have made her even more appealing with her wartime victory curls. She looks so good on this mug which changes with the heat so her design is right there staring back at you when you sip from her.

Get the Poison Ivy Coffee Mug on Amazon.com Source: Amazon.com
Heat changing mugs are awesome and this one takes it to a whole other level. Before you put coffee into your Batman coffee mug, all you’ll see is the bat symbol. When you pour your hot liquid in (it can even be cocoa, you know if you’re not the kind of caffeine tweaker most of us writers are), BATMAN appears to save the day and the symbol disappears. Whaaat. Magic. (Science. Same thing??)

Get the Batman Comic Mug on Amazon.com

5. A Glass Batman Coffee Mug That Totally Won’t Out You As The Dark Knight Source: Amazon.com
Why would Batman hint that he was Batman? Ha! Or… maybe he’s trying to be clever and he’d hint towards being Batman because he knows we’ll think that. I always used to drink my hot drinks out of glass mugs as a kid so I’m glad they’re coming back. There’s something satisfying about seeing the liquid decrease in volume as you’re drinking it.

Get the Batman Glass Coffee Mug on Amazon.com

6. As Far As Batman Coffee Mugs Go, This Is One For Diehard Fans Everywhere Source: Amazon.com
If you wanted to and it’s your thing, it’s sculpted so that it could be put inside of a display cabinet alongside other Batman collectibles. That said, why would you Gothamites deny yourself the pleasure of drinking from a mug that’s shaped to look like Batman’s face? Pro-tip: make a gruff voice into it as you drink and become Christian Bale’s Batman. FUN, right?

Get the Batman Coffee Mug on Amazon.com

7. Pow! Blam! Slurp! This Batman Comic Panel Mug Will Knock You Out Source: Amazon.com
Easy to spot when it’s so early your eyes haven’t opened yet and you’re desperate for an oral caffeine injection. This mug has legit Batman comic panels that make up its eye-catching design that are sure to be the talking point of any sleepover. Just be prepared for friends to ask if they can use “the Batman mug” ’cause they’re gonna want to.

Get the Batman Comic Panel Mug on Amazon.com

8. Drink With The Joker From This Arkham Origins Inspired Heat Change Mug Source: Amazon.com
One of the freakiest designs we’ve found. Naturally, we love it. In a similar situation to above, imagine a guest to your home deciding, “Oh. I want a coffee” and being entirely unsuspecting of what adding hot water to this plain black mug will do. I’m not saying they’ll poop their pants, but Joker sure wouldn’t be disappointed if they did.

Get the Joker Arkham Origins Mug on Amazon.com

9. Reach Out And Touch Faith With This Batman Mug Source: Amazon.com
Bruce– I mean Batman sure looks expectant of something on this mug, and we’re pretty sure it’s for you to drink out of it. It is pretty cool, though. It’s the Batman of old(e) and looks amazingly like how I do when I’m reaching for the instant coffee on mornings when operating a coffee machine is too much.

Get the Retro Batman Mug on Amazon.com

10. Shake Up Your Mornin’ With A Harley Quinn Mug Source: Amazon.com
She looks amazingly devious. Having dealt blows to the Batman plushie she and Ivy adopted just for target practice, she’s lounging and waiting for all the coffee in the world. We know those feels, HQ. The artwork on it is incredible with an intricate design that goes all the way around it and a red inside that will compliment your massive mug of coffee poi-fectly.

Get the Harley Quinn Coffee Mug on Amazon.com

11. Funko Make Character Mugs Now And This Batman One Is So Adorable, We Can’t Hack It

Source: Amazon.com
They’re just appealing to every corner of the market with this stuff and WE LOVE IT. I’ve been waiting for another great fad since the Great Pog Revolution of the 90s (I lost a lot through schoolyard gambling, I don’t wanna talk about it) and Funko has made my dream come to life with their Pop! collection. And now I can drink out of a Pop!

Get the Funko Pop Batman Mug on Amazon.com Source: Amazon.com
Like the others, this Batman coffee mug starts off black when it’s cold and then lightens up to reveal Batman, Catwoman, the Joker, and Harley. You can tell Catwoman doesn’t want to be on the same side as Bruce and since he called her Robin in bed, who can blame her?

Get the Justice League Mug on Amazon.com

13. Drink Your Ha-Ha-Hot Coffee From This Joker Mug Source: Amazon.com
We’re pleased to say its design is more like the Joker-of-old than it is the Joker-who-shall-not-be-named. You can find Harley Quinn sipping from it on a regular basis. Indeed, more than once a day, Harley alternates between drinking coffee and kissing its face. Thankfully for you, we don’t have a photo of black lipstick marks all over, so you can see its actual badassery.

Get the Joker Mug on Amazon.com

14. Why Not Have A Cappuccino In Your New Batman Mug? Get the Batman Mug on Amazon.com

15. Bam! This Vintage TV-Era Robin Mug Is Free Of Flaws Source: Amazon.com
Its design is also well-suited to the era in which the TV show was really at its height. It’s got your bam pow splat, it’s got Batman’s boyfriend (I mean Robin), and it’s got a pop art background that looks plucked right out of the cinematographic sides of an Austin Powers movie. And truthfully, we are living for it.

Get the Vintage Robin Mug on Amazon.com

16. Bring Out The Jokes With This Creepy-Cool Joker Mug Source: Amazon.com
So, how do you think Joker takes his coffee? Plain and black or with syrup and sugar? When you think about a person’s ideal coffee drink, it can tell you a lot about their personality. All I know is, there’s no way he drinks decaf. If yours is like his — albeit, marginally less maniacal — you should get the mug to match!

Get the Joker Coffee Mug on Amazon.com

17. Join The Gotham Girls For Their Weekly Catch-Up Sesh Source: Amazon.com
Find out who’s beaten Batman recently, or how there are so many cats out there in need of a good home. Find out Ivy’s favorite plant and if it’s been genetically engineered to strangle someone yet, or that Harley’s got boy-trouble. But why wait a week? Join the girls and get a caffeine high every day if you want to, with this neat little Batman mug (and complimentary sticker!)

Get the Gotham Girls Mug on Amazon.com

18. Funko Have A Twofer For All Batman Fans, You Can Get A Robin Mug Too

Source: Amazon.com
This Robin coffee mug desires nothing more than it desires to chill in the Batcave, spinning some swingin’ old school tunes on the radio. Sounds nice, doesn’t it? Imagine the same with this adorable Funko mug, your feet kicked up as you lounge back on your office chair remembering and dreaming of Chris O’Donnell.

Get the Funko Pop Robin Mug on Amazon.com

19. The Ceramic Mugs Come In A Variety Of Characters, Harley Quinn Wouldn’t Be Left Out Source: Amazon.com
Drink your coffee in this mug while you eat your puddin’, puddin’. Or dunk your cookies-slash-biscuits, whatever you do when you’ve got a hot beverage in front of you and a body desperate for hydration and energy. My favorite thing to do while caffeinating is to have existential conversations with myself. If anyone, Harley would get that.

Get the Harley Quinn Coffee Mug on Amazon.com

20. This Batman Coffee Mug Has Its Own CAPE Source: Amazon.com
Imagine the selfies and videos you could take while you’re drinking from it. It’s such a cool idea, you’ll never have to drink from a basic white mug you got for a couple of bucks that doesn’t have a cape ever again. Think Batman drinks from this when he first gets up? Come on, you know he does.

Get the Batman Cape Mug on Amazon.com

21. Crime’s Never Looked Better Than It Does On This Gotham Sirens Mug Source: Amazon.com
Ivy, Harley, and Selina are back, and they’re taking no prisoners besides themselves. The design on this mug is far removed from a lot of Gotham girls designs out there which is why we have a soft spot for it. These three Batman villains would make an amazing pop group. And honestly, we are drinking it up the idea.

Get the Poison Ivy Catwoman and Harley Quinn Mug on Amazon.com